Review: Performance of Aristophanes's "The Birds"

PERFORMANCE OF ARISTOPHANES' "THE BIRDS" IN HOUSTON 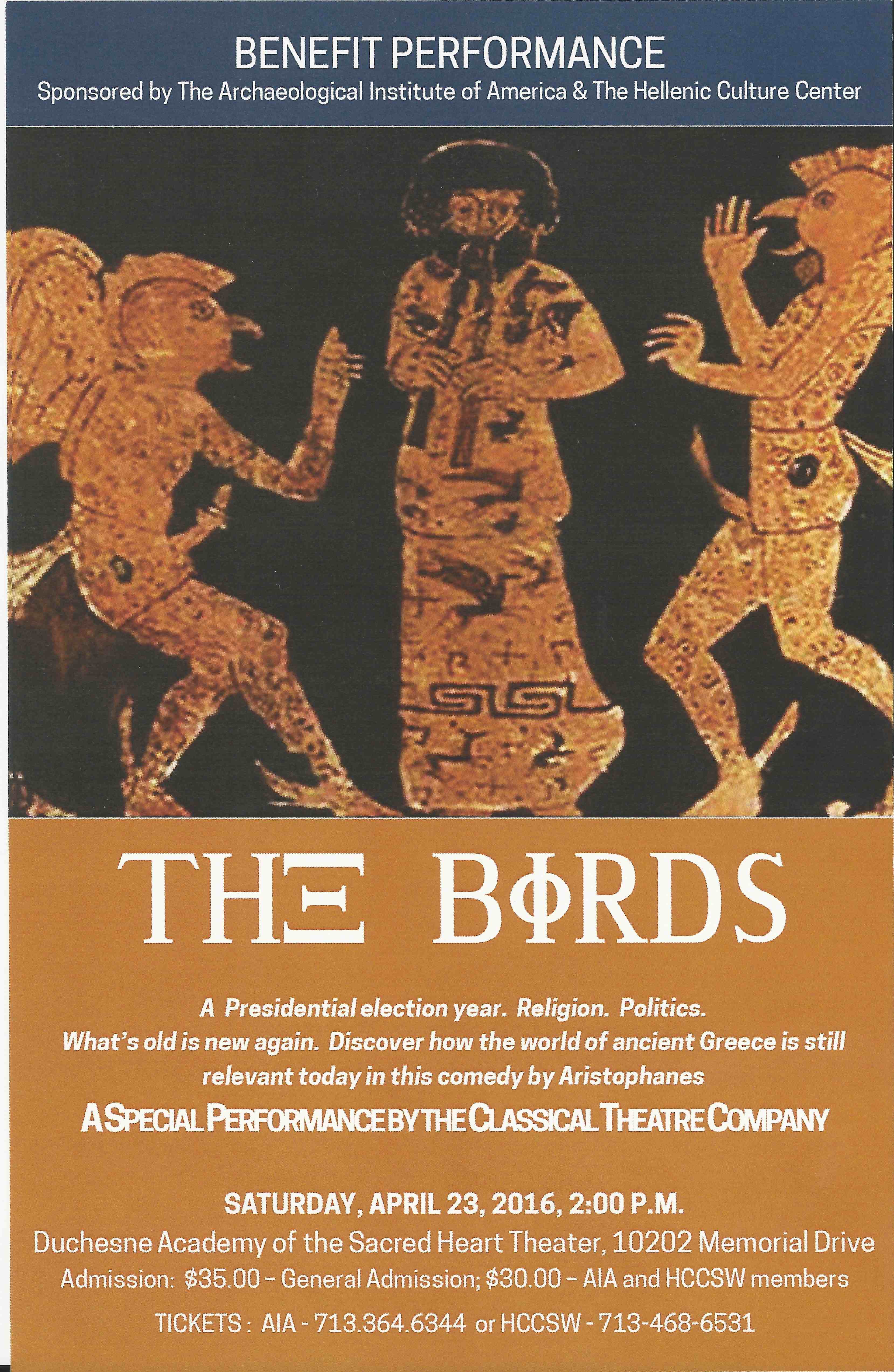 The long-awaited performance of "The Birds" (Όρνιθες), the hallmark 414 B.C. political comedy by Aristophanes, took place at the Theater Hall of the Duchesne Academy of the Sacred Heart in Houston on Saturday afternoon, April 23 2016. Presented jointly by the Hellenic Cultural Center of the Southwest and the Archaeological Institute of America, Houston, the ~75 minute performance by local actors Luis Galindo, Julia Traber, Carl Masterson, Greg Cote, and others, was preceded by a well-conceived introductory presentation by Rice University's Professor Harvey Yunis.
"The Birds" is Aristophanes' longest surviving play. It has been hailed as a perfectly realized fantasy in which the protagonists, Pisthetaerus and Euelpides, to escape the dysfunctions, everyday woes and decline of power associated with Athenian democracy, ascend to the realm of the birds in the clouds where they found a new city, Cloudcuckooland, and get the gods to accede to their power-restoring demands.
The original play, besides exploiting - to comic effect - the universal themes of what can go wrong in a free democratic state and how the phallically-symbolized exercise of power in that state can be diminished and restored, is largely driven by wordplays, sub-plots, jokes and references that relate, indirectly, to the main political events that shaped the time
when it was written as an entry for the famous theatrical contest at the annual Panathenian celebration - events like the Peloponnesian War, the ill-conceived Sicilian expedition, the emasculation of the Hermean statues of Athens, and so on. Consequently, contemporary interpretations of the play strive to adapt the spirit of Aristophanes to the present time, affairs and symbols, so as to maintain the playwright's intent while making it accessible to today's political landscapes.
In that sense, the abridged version presented on April 23, directed by Houstonian Philip Hays, was quite timely and successful. Presented at a time when our American democracy's shortcomings are challenged by an unprecedented presidential election season that echoes of hard-to-pin dissatisfaction exploited by demagoguery, the play's jokes and indirect allusions, although far removed from the original, were quite well-placed to our times, often in ways that, one imagines, would make Aristophanes smile. "Plus ça change, plus c'est la même chose" (The more it changes, the more it stays the same), as the French like to say.
The event, therefore, was a success, and it led the very diverse and somewhat eclectic audience to lively discussions during the Greek light-meze-and-baklava-filled reception that followed. An additional note of satisfaction for this reviewer is that the fruitful collaborations between the Archaeological Institute of America and the Hellenic Cultural Center of the Southwest are set to resume on a good footing by our active community.
Tweet