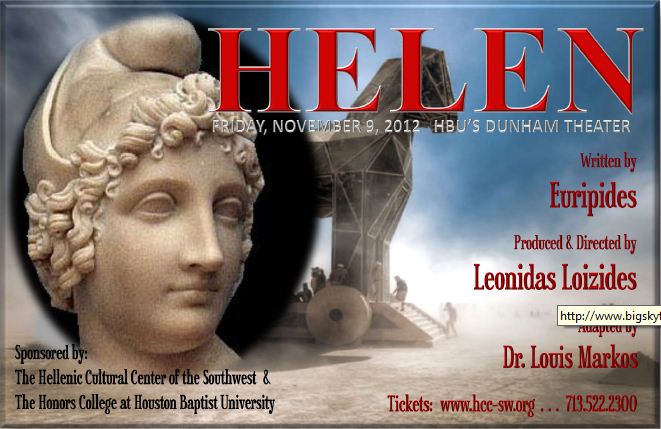 Join us on Friday, November 9, at 7:30 as we present Euripides’ Helen, translated into modern English poetry by Louis Markos, professor in English and Scholar in Residence at Houston Baptist University. Produced and directed by Cyprus native Leonidas Loizides and performed by his troupe of Greek actors, the play will be held at HBU’s Dunham Theater, 7502 Fondren Road.

The Helen of Euripides offers a new twist on a very old story. What if Helen never actually went to Troy? What if Hera, wishing to punish Paris, caused him to take a phantom Helen to Troy while the real Helen was sent for safekeeping to Egypt? And what if, seventeen years later, Helen and her husband Menelaus were to be reunited on the barbaric shores of North Africa?
Would the meeting end in death or a reaffirmation of the power of love? Join us and find out!

The production of “Helen” is produced and directed by Leonidas Loizides and performed by his troupe of Greek actors. The performance will be held at HBU’s Dunham Theater, 7502 Fondren, Friday, November 9th at 7:30 pm.
In Greek mythology
. . . Helen of Troy was the daughter of Zeus and
Leda, step-daughter of King Tyndareus, wife
of Menelaus and sister of Castor, Polydeuces
and Clytemnestra.
. . . Paris was the son of the king of Troy and loved Helen, queen of Sparta. Helen’s abduction by Paris brought about the Trojan
War.
. . . thus, history was written.
Go to www.hcc-sw.org for more information and to purchase tickets. Or, call 713.522.2300.

NO ADDED FEES! Buy Online and SAVE!!
Lost or stolen tickets can be re-issued. Tickets can be transferred.
Save time with e-tickets you can print right from home.