Hellenic Cultural Center of the Souhwest

invites you to the music concert:

"A Music Journey to Greece with a voice and a piano"

THIS EVENT IS SOLD OUT!!!

The concert by Yannis Spanos and Hrysoula Stefanaki will be an unforgettable musical journey through the landscape of songs made popular by Spanos.  The audience will be encouraged to sing along. 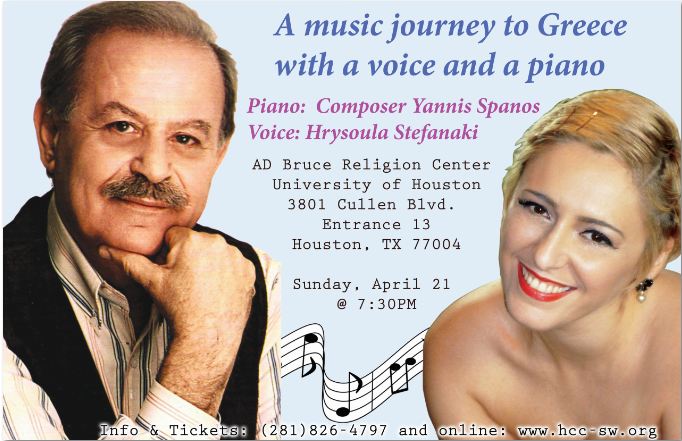 Yiannis Spanos was born in Kiato, a small coastal town in Corinth, Greece, where he began studying piano at an early age.  After dropping out of law school, he moved to Paris where he worked with the rising stars of the French music and theater scene, including Brigitte Bardot and Pia Colombo.

In the early 1960s, he returned to Greece to create his own distinct music, employing the talents of the country’s emerging young singers.  He was a founder of the New Wave period of Greek music with albums such as Anthologies, That Summer and Aristotelous Street.

Hrysoula Stefanaki was born and raised in Iraklion, Crete, where her parents early on recognized her artistic talent.  She began formal study of piano, guitar, voice and music theory at age six at the city’s Apollo Conservatory of Music, while at the same time taking ballet lessons.  During high school she participated in theater.  She continued her musical studies later at the Olympic Conservatory in Athens.  Stefanaki has collaborated with major Greek composers and singers including Manolis Mitsias, Vicky Mosholiou, Dimitris Mitropanos, Yannis Kotsiras, Dimitris Bassis, Glykeria and Christos Nikolopoulos.

The event is under the auspicies of Greek Consulate of Houston.