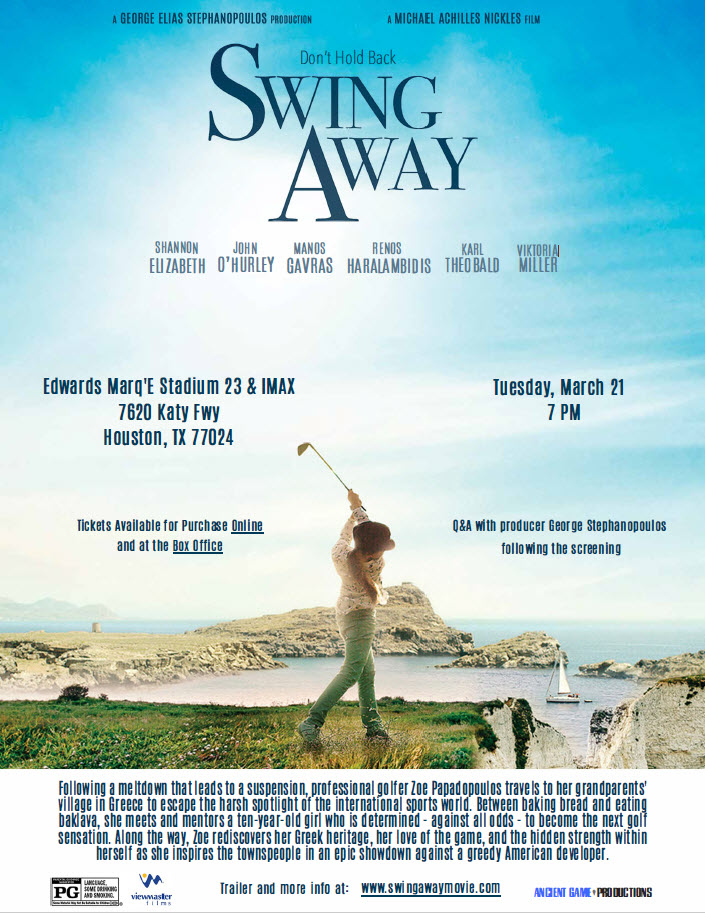 On Casting: The most challenging role to cast was the one of Stella. There just aren't that many pre-teen, Greek-speaking, golf-loving girls in Greece. There probably aren't many in the world, actually. It was a little like finding a needle in a haystack. George Stephanopoulos searched high and low for many years when looking to cast a boy in the role of Spiros (now Stella), before I was even attached to direct. Eventually, we held casting sessions in Athens and that's where I met Viktoria Miller. She had never been in a film before but had a natural ease in front of the camera.

She was also very honest, serious and curious, which are qualities I greatly admire in any actor.
She took six months of golf lessons to prepare for the role and ended up giving a wonderful performance in the film.

On Locations: We shot the film on the island of Rhodes, which is very beautiful and fairly easy to make look like a pretty postcard. A lot of films are content with sharing just that. Working with cinematographer Yiannis Daskalothanasis, however, I wanted to reach past that kind of tourist-y surface and find specific visuals that might hint at a more authentic experience. In essence, I wanted to share my own memories of Greece - the sights and sounds I took home with me after my first visit to the country: old yiayias speaking Greek as they walk through the village, a grazing goat at sunrise, a vendor selling fruit off his scooter, the meditative color and texture of the sea, the delicious food. We set aside time to capture those moments at each of the locations we visited so we could sprinkle them throughout the edit.

On Writing: The script was very ambitious and we didn't have a lot of time. Nevertheless, we committed to telling the story in as big a way as possible, without cutting too many corners. There were many nights that we'd have to reconsider the next day's material based on what we were able to achieve the day before. Luckily, my wife, Julia, one of the screenwriters, was in Greece to make those last-minute, high pressure changes. The actors came toexpect new material each morning and, again, lucky for us, they rose to the challenge.

For a full description read the PDF here