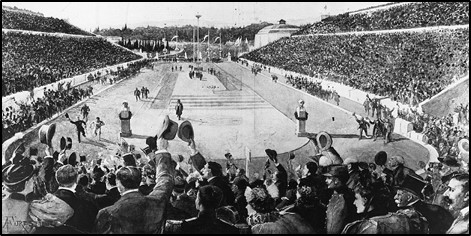 The ancient Greek messenger, Pheidippides, runs from Marathon to Athens to announce the Athenian victory over the Persians.

The Greek runner Spiros Louis wins the first modern Olympic marathon, running the distance from Marathon to the Panathenaic Stadium in 2 hours, 58 minutes and 50 seconds.

Tony Miller and Sara Olague, winners of the random drawing from the 2015 Chevron Houston Marathon, competed in the 33rd Athens Classic Marathon.

Attend the 29th Annual Pastichio Dinner to honor the Houston-area and Greek runners who participate in the Houston-Athens Marathon Exchange.

Two trips to compete in the 2017 Athens Authentic Marathon on November 8, 2017 will be marking the 30th year of this cultural event for Houston runners in conjunction with the 2017 Chevron Houston Marathon.

Two runners who finish under 4 hours are selected at random to run in the 35th Athens Authentic Marathon in Athens.  2017 is the 30th year for this cultural exchange program.