God Loves Caviar: A brief overview of the historical background

On March 29, the Hellenic Cultural Center of the Southwest presented Yiannis Smaragdis’ feature “God Loves Caviar” a biopic of the life of the prominent benefactor of Greece Ioannis Varvakis, whose actual name was Ioannis Leontidis. This film is a very ambitious Greek production with a prominent cast including Sebastian Koch, the German actor whom you might have seen in the “Life of the Others” playing the East German author who was being spied by the communist regime, and Catherine Deneuve who is playing Empress Catherine the Second of Russia, most commonly known as Catherine the Great. Among the international cast we must recognize Juan Diego Botto, the young, very talented and accomplished Spanish actor who was also casted in Smaragdis’ “El Greco” and a very talented Russian actor Evgeniy Stychkin, casted as Varvakis’ butler Ivan. The film aims in presenting Varvakis’ resolute for success and love for his country. Despite his strong character, his entrepreneurship and his survival skills Varvakis’s personal life was a failure. The film attempts to portray his life for which we don’t really know much to this date except for a few details and some more that were recently surfaced. We certainly know one thing that he accomplished, to elevate caviar to a cherished and expensive delicacy. Sebastian Koch succeeds in playing a man who internalizes all of his problems; who is sensitive despite his strong and dominating personality who live room for no one else. Smaragdis must also be commended for the excellent cinematography and for the overall production design.

While several aspects of Varvakis’ character and life portrayed in the film are fictional including the fisherman, who introduces him to caviar, played by the outstanding Greek comedian Lazopoulos, several main events of Varvakis’ life are true and historically documented. Although the film gives a very sketchy introduction of the historical background within which the events shown in the film unfold, it is quite important for foreign audiences to describe the historical background of Greek and international events related to Varvakis’ life. This is what we attempt to do next.

Varvakis was born in the island of Psara located close to the island of Chios at 1747. His father was a merchant. Varvakis became a mariner and very early in his life he owned one ship of which he was her master. In 1768 water breaks between Russia and the Ottoman Empire. It is quite interesting to see the events of that time weighing in the present conflict between Russia and Ukraine. 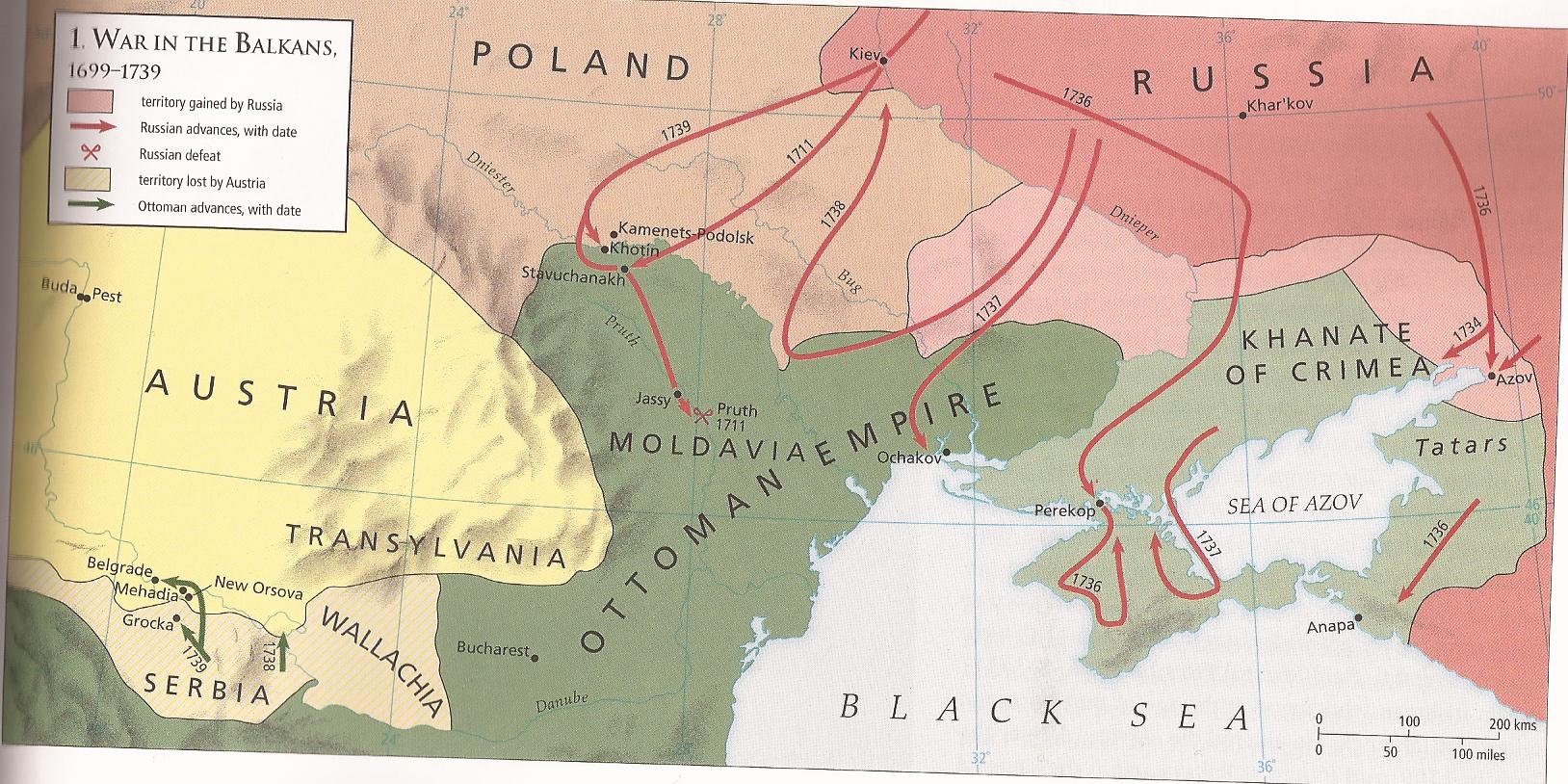 As you see in the map above, the Ottoman Empire were stretching all the way to the south of present day Ukraine. East of this part of the Ottoman Empire was the Khanate of Crimea, which was a protectorate of the Ottoman Sultan. As you see there is no Ukraine. In fact, today’s Western part of Ukraine was part of Poland, and the east part of Ukraine is Russia (this also includes the part depicted by being adjacent to Russia). The Russian-Ottoman conflict about this territory has a history that goes way back before the start of the war of 1768. The real reason for this war is that the Russian Empire seeks to gain access to the Black Sea and therefore to the Mediterranean Sea. This is a crucial pathway for Russia’s future economic development since it would secure for Russia access to the grains markets in various Mediterranean ports. The war starts with the attempt of the Sultan to annex the Khanate of Crimea. Catherine the Second opposes the Sultan’s decision, the Sultan, in turn, demands that Russian troops withdraw from the south part of Poland and skirmishes between troops of both empires break up in several parts of their frontier. Finally these events and up to a full-blown war between the two big powers. In 1770, Catherine the second attempts to open a second front, this time way south, in the Aegean Sea. Preparations to open this front start as early as 1768 with the Russians attempting to push the Greeks of Peloponnese into a revolt against the Turks. The Greeks demand supplies, guns and naval support which the Russians promise to provide and in 1770 they dispatch General Alexei Orlov with a small flotilla and more promises but nothing close to what the Russians originally promised. Despite the insufficient fulfillment of the Russian promises the Greeks in the south of Peloponnese revolt and soon the revolution engulfs the entire Peloponnese. The Greeks with Orlov’s help gain control of main fortresses in south Peloponnese. After a year the Ottomans manage with the help of Albanian troops to suppress the revolution in Peloponnese. Despite Orlov’s initial calculations the Greeks in the rest of the mainland do not revolt against the Turks. The mistrust of Greeks for the Russians who keep promising but never deliver helps them to avoid a futile upraising.

However, the Russian flotilla along with some Greek vessels still harasses the Ottoman fleet in the Aegean. Finally, there is a decisive naval battle at the port of Cesme, 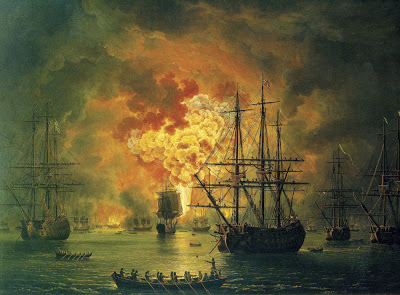 which lies east of a peninsula located to the east of the island of Chios. Admiral

Spirodov is in command of the Russian fleet and she’s the one who actually giving us information about Varvakis’ accomplishments in the battle. Spiridov managed to corner the Turkish fleet inside the port and then the cover of the night she attacked the Turkish fleet with fire ships. One of them is Varvakis’ own ship. The film shows Varvakis ramming with his ship tuned into a fire ship the Turkish flagship, but this event is rather fictional because we do not have an accurate historical account of who set the Turkish flagship ablaze. The battle of Cesme ends up with a Russian victory which plays a decisive role for the remaining events because the Turks lost their naval superiority in this battle. Azov abandons the Greeks in their fate in one more attempt for Greek liberation has been crushed. The war ends up in 1774 with the Treaty of Kucuk Kaynarca, which for the first time designates the Czar as the protector of all Orthodox population of the Ottoman Empire. Secondly, among other provisions, gives the right to Greek owned ships to bear the Russia flag. This enables Greeks to expand or trade throughout the Mediterranean. Moreover it allows the Russians to have access to the Mediterranean Sea for nonmilitary purposes via the Bosporus and the Dardanelles straights. Last but not least, the Russia annexes the south part of present day Ukraine including the Khanate of Crimea setting the stage for the formation of the present day conflict.

After the end of war Varvakis attempts to sail with his new ship the Bosporus. The Turks discover him and they confiscate his ship although she was bearing the Russia flag. Varvakis has now lost all of his fortune and completely broke manages to escape to Russia where he seeks refuge in very soon she meets Catherine the great who so handsomely reward him for his services during the war of 1768. You have watched the rest of his personal story in the film. The man who is advising Catherine the second is not named in the film but probably is General Grigoryi Potemkin, an advisor and courtier of Catherine the Great, succeeding in that role Grigori Azov, the brother of Alexei Azov, who deceived the Greeks. Potemkin is played by the handsome Greek actor Papakaliatis.
We fast-forward to 1825. The Greek revolution is in turmoil as the great powers attempt to gain influence on the Greek revolution. The Greeks are mostly occupied with attacking each other rather than attacking the enemy who gains the opportunity to recuperate and bring fresh forces from Egypt. Varvakis donates funds to the Greek cause and also to the relief of the inhabitants of the island of Psara, which was destroyed by the Turks a few years earlier. As we see in the film Varvakis becomes an inconvenience to the then provisional Greek government. In the film we see the Prime Minister Kountouriotis, grandfather of the renowned Greek admiral Pavlos Kountouriotis, agreeing to the imprisonment of Varvakis in the infectious diseases infirmary in the island of Zakynthos which was then under the British rule. We don’t know the role of Lefentarios (Juan Diego Botto) in Varvakis’ final act of his life. This figure is probably fictional attempting to underscore the role of the Fanariotes (yes, they do come from Fanari) who served the Ottoman Empire as diplomatic and public employees. However, it is historically accurate, that Varvakis dies in the infectious diseases infirmary in the island of Zakynthos. After his death he bequeathed the biggest part of his estate to Greece primarily for funding secondary education schools. But only many years later his desire became reality with the construction of three high schools known as Varvakia. Today, all these schools are united into one high school which is designated as a magnet exemplary school.

Please don’t forget to join us in October for a celebration of the life and art of the renowned Greek painter El Greco of Crete. The event includes a presentation of the art of El Greco and a showing of Smaragdis’ blockbuster feature “El Greco”.