The Hellenic Cultural Center in partnership with the Houston Baptist University is proud to announce the production of another Greek tragedy written by Aeschylus, Oresteia. The theatrical group of internationally acclaimed director Leonidas Loizides is scheduled to tour the United States in the Fall of 2010 and will perform in Houston on Friday, October 15, 2010 at 7:30 PM at the Dunham Theater of Houston Baptist University. The warm response that Bacchae and Troades met from every destination they were presented during the world tours in 2008 and 2009 induces the theatrical scheme with the moral obligation to stay loyal to the initial task, which is the continuous, intercultural contact of the audience around the world with the Greek heritage, through the poetry of Euripides. 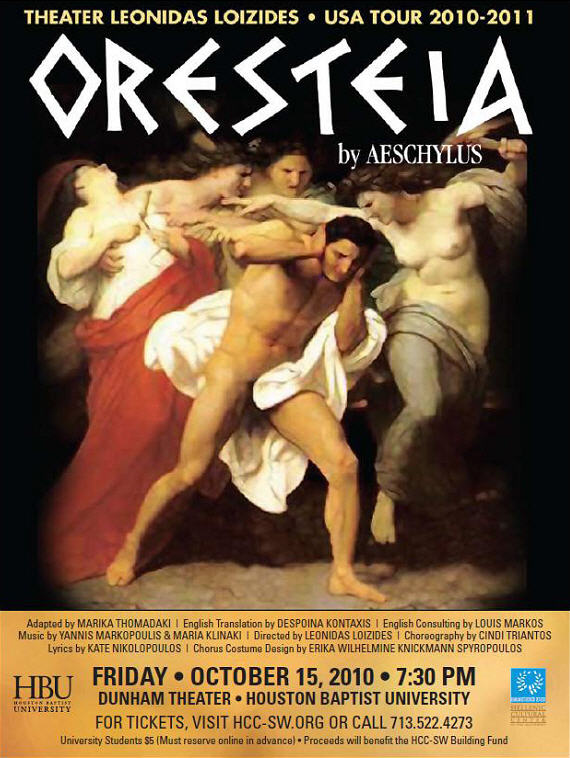 The Oresteia is a trilogy of Greek tragedies written by Aeschylus that concerns the end of the curse on the House of Atreus. When originally performed it was accompanied by Proteus, a satyr play that would have been performed following the trilogy; it has not survived.

The term "Oresteia" originally referred to all four plays, but today is generally used to designate only the surviving trilogy. "The individual plays probably did not originally have titles of their own." The only surviving example of a trilogy of ancient Greek plays, the Oresteia was originally performed at the Dionysia festival in Athens in 458 BC, where it won first prize. Overall, this trilogy marks the shift from a system of vendetta in Argos to a system of litigation in Athens.

Agamemnon is the first play of Oresteia; it details the homecoming of Agamemnon, King of Argos, from the Trojan War. Waiting at home for him is his wife, Clytemnestra, who has been planning his murder: partly as revenge for the sacrifice of their daughter, Iphigenia; partly because during the ten years of Agamemnon's absence Clytemnestra has entered into an adulterous relationship with Aegisthus, Agamemnon's cousin.  He is the sole survivor of a dispossessed branch of the family who is determined to regain the throne he believes should rightfully be his.

The Libation Bearers (Greek: Choiphoroi) is the second play of the Oresteia. It deals with the reunion of Agamemnon's children, Electra and Orestes, and their plan to avenge the death of their father.  At the end of the play Orestes kills Clytemnestra and Aegisthus and then flees from Argos, pursued by the Furies, who torment him for committing matricide.

The Eumenides (also known as The Furies) is the final play of the Oresteia; in it, Orestes, Apollo, and the Furies go before Athena and a jury consisting of the Athenians at the Areopagus (or “Hill of Ares/Mars,” a flat rocky hill by the Athenian agora where the homicide court of Athens held its sessions), to decide whether Orestes' murder of his mother, Clytemnestra, makes him worthy of the torment they have inflicted upon him.

The Theatrical Scheme of Leonidas Loizides was established as a non-profit organization, with the aim to spread Greek culture across the world.  The troupe has received excellent reviews and celebrity acceptance wherever they have performed, and have won awards from the Municipality of New York and the U.S. Congress.

The trilogy, "Oresteia" by Aeschylus, was adapted by Athens University Professor Marika Thomadaki, translated into English by award-winning poet Despina Kontaxi, and edited and revised by English Professor Louis Markos (Houston Baptist University).  The music and lyrics are by Elena Faidra/Maria Klinaki and Kate Nikolopoulos, the Chorus and Actors’ costumes by Erika Wilhelmine Knickmann Spyropoulos and Georgia Koniaviti, the choreography by Cindi Trent, and the set design by Nasos Gurov.