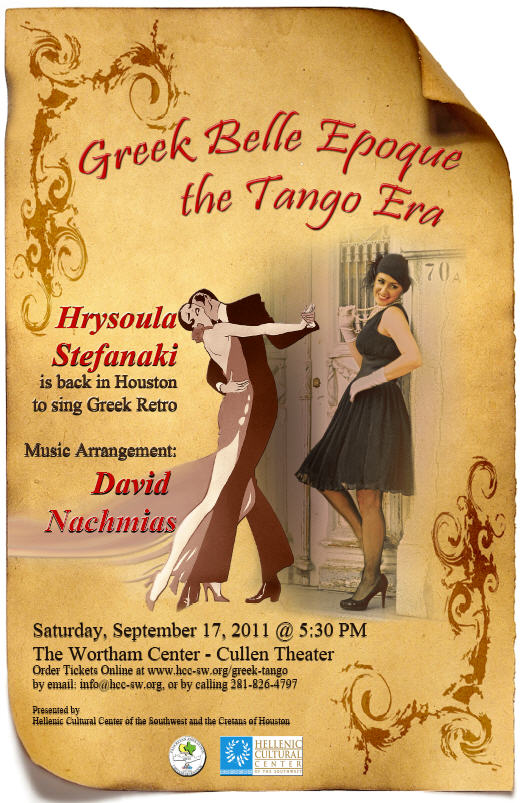 The “Belle Époque” of tango in Greece

The Belle Époque or La Belle Époque (for beautiful era) was a period in European social history that began in the late 19th century (1880) and lasted until the end of World War I. During this period, some profound changes occurred in science, technology, literature and in art: the telephone joined the telegraph as a means of communication, gas lighting gave way to electric light, the cinematograph and the phonograph were gradually becoming parts of daily life and entertainment.

The Belle Époque is described as a period of romanticism and optimism, where the Parisian aesthetics

were embraced in the theater scene by the popularization of pieces written for solo piano in a romantic style. Nevertheless, the term “Belle Époque” in Greece is often used by the old generation in order to describe the carefree, joyful and dancing atmosphere of the thirties: the “Golden age” of tango.

One of the most important artists at the beginning of the 20th century was Attic (Kleon Triantafyllou, 1882/5-1944) who was a composer, a lyrist and an interpreter of his own songs. Not only is he considered the reformer of the ‘Athenian’ song but the creator of the tango-song as well. Songs like “Yet, another tango”, “Poppy” and “Love is a mirage”, are some of his most important and famous compositions based either on the rhythm of tango or habanera.

Tango as both music and dance became very popular in Greece during the inter-war period (1922-1940) and there have been many important composers as well as musicians who created the so-called “Greek school of tango”. Their compositions differentiate according to their musical knowledge, musical influences e.t.c and their legacy has been passed down to the next generation. These tango pieces are either authentic Greek compositions (namely lyrics and music) or songs which have been interpreted into the Greek language.

The tango era has begun…