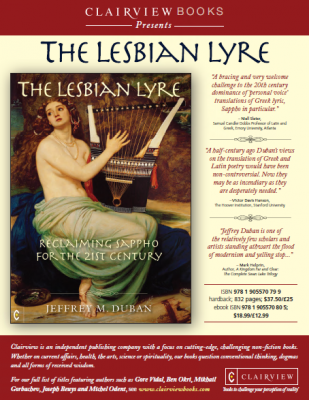 The evening’s performers include:

Debuting at the University of Houston’s Moores School of Music, April 1, 2017 (7:30 p.m.), is a program of lush music from the 19th-21st centuries focusing on the ancient Greek love poet Sappho (7th and 6th centuries BC).

A collaboration of classicist and author Jeffrey Duban and Greek-Canadian composer Constantine Caravassilis, the program is produced and narrated by Duban and features, among other works, two key Caravassilis compositions: “Sappho de Mytilène” (2009)—for soprano, piano, and flute—and a world premiere commissioned by Duban for this occasion, “My Life a Lyric Cry”—a chamber oratorio for soprano, narrator, piano, cello, and oboe, based on Sara Teasdale’s (1884-1933) great narrative poem, “Sappho.”

Sappho and Homer (8th century BC), as the program emphasizes, are the foundation of the Western literary tradition. Sappho, a lover of women, was born and performed on the Greek island of Lesbos (its capital Mytilene) off the northern coast of Asia Minor (modern Turkey).

“Lesbian” originally and for the longest time meant a resident of Lesbos, gaining its present meaning only in the 19th century.

Sappho’s poetry, with several exceptions, exists only in fragments. Yet despite the meager state of her poetry’s survival and the geographic limitations of Sappho’s own life, her supreme reputation survives undiminished in our own time.

But Sappho’s fire is of many kinds, also imagined as

. . . passionately tender, and glowing; like oil
set on fire, she is soft and warm, in excess.

Duban developed the program as a companion to his book, The Lesbian Lyre: Reclaiming Sappho for the 21st Century (Clairview Books, 2016). See www.thelesbianlyre.com. The book will be available at the UH Barnes & Noble and at the program itself.

The Timeless OXI of Hellenism