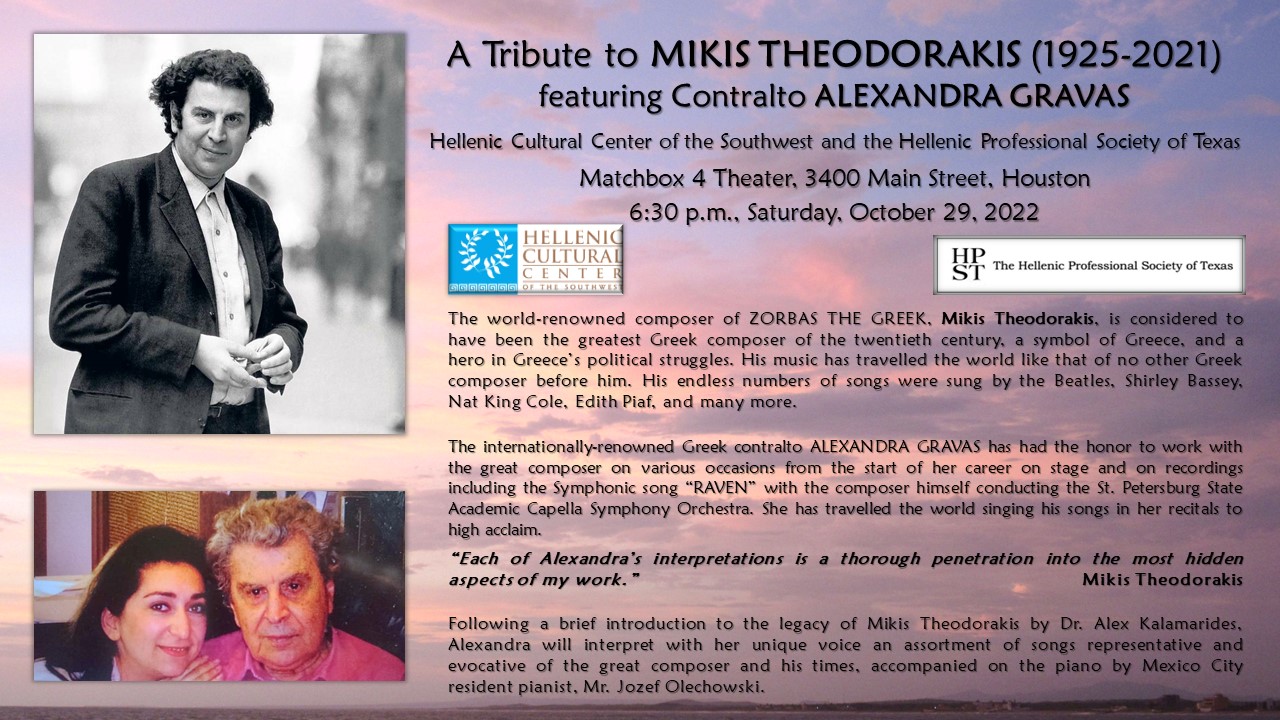 The world-renowned composer of ZORBAS THE GREEK, Mikis Theodorakis, is considered to have been the greatest Greek composer of the twentieth century, a symbol of Greece, and a hero in Greece’s political struggles. His music has travelled the world like that of no other Greek composer before him. His endless numbers of songs were sung by the Beatles, Shirley Bassey, Nat King Cole, Edith Piaf, and many more.

The internationally-renowned Greek contralto ALEXANDRA GRAVAS has had the honor to work with the great composer on various occasions from the start of her career on stage and on recordings including the Symphonic song “RAVEN” with the composer himself conducting the St. Petersburg State Academic Capella Symphony Orchestra. She has travelled the world singing his songs in her recitals to high acclaim.

“Each of Alexandra’s interpretations is a thorough penetration

into the most hidden aspects of my work.”

Following a brief introduction to the legacy of Mikis Theodorakis by Dr. Alex Kalamarides, Alexandra will interpret with her unique voice an assortment of songs representative and evocative of the great composer and his times, accompanied on the piano by Mexico City resident pianist, Mr. Jozef Olechowski.

Mikis Theodorakis was born in 1925 on the Greek island of Chios and studied at the Athens and Paris conservatories. A member of the wartime resistance, he remained active in politics and served several times in the Greek parliament. He is best known outside Greece for his film scores, including Zorbas the Greek (1964), Z (1969), and State of Siege (1972). He composed seven symphonies, four operas, oratorios, ballets (including Antigone, 1959), and more than 1,000 songs that have reached cult status in Greece. He is viewed as Greece’s best-known composer and is regarded in his homeland as a national hero.

“Mikis Theodorakis is an incredible man who has led a lifelong struggle for the music in Greece, and at the same time for the freedom that evidently has to accompany this music. I doubt if there has been another life that shows so strongly the connections between revolutionary art and political freedom.”         Arthur Miller

In January 2017 she was awarded with the Greek UNESCO prize for her contribution to the ARTS. She belongs to the new generation of Greek singers that very successfully combines the western traditional classical singing with her Greek musical roots, reflected in her sampling
and interpretation of Theodorakis’ “Phaedra”
No wonder Alexandra has been referred to as “Cultural Ambassador” for her country, Greece.