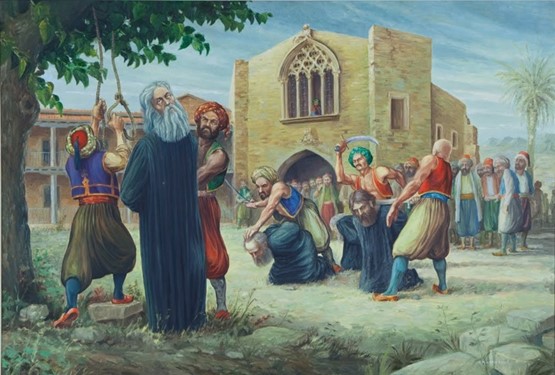 Friends of Cyprus and the Hellenic Cultural Center of the Southwest co-organize a memorial that will help us remember and not forget the invasion of Turks to Cyprus on July 20th, 1974 and draw parallelisms to the great Hellenic Revolution of 1821.

Have you ever heard that Cyprus participated in the 1821 War of Greek Independence?

So you have one good reason to attend this event and to discover how the people of Cyprus contributed to the 1821 Revolution. Their contribution was primarily financial. Among the leaders of the revolutionary movement was  Archibishop Kyprianos who was hanged by the Turks along with about 500 other prominent Greek community leaders on July 9th, 1821.  Although Cyprus never became a theatre of military operations, several Greeks from Cyprus traveled to Greece to fight along with the other Greeks for the independence cause.   In 1974 just as in 1821 Greek-Cypriots fight to stop the Turkish invasion.   In this year's event, we will commemorate those who sacrificed themselves to defend Cyprus by giving a short account of their contributions to the defense of the island.